skip to main | skip to sidebar

A little more progress on these ugly buggers. Day by day they get closer to their final forms. I'm still confident I can get these fellas done by the end of the month. Twice I was almost distracted from my goal, once by my Obliterators, and again by my HellDrake.... but somehow I resisted, and I am more resolute than ever.
Posted by Mr.Esty at 7:51 AM 4 comments:

I got some more super-detailing done on Ol' Smokey here, and, as promised; a pic of his pack-mate.

I have a 3rd Hellbrute, another DV push-fit model, but what I really want is an old ForgeWorld Nurgle Dreadnought. We'll see what happens.

I grabbed this push-fit Dark Vengeance Hellbrute on the cheap from ebay, just so I could mess him up. I did a foot and an arm swap but mostly I was challenging myself by trying to make the back of this model look good; but in the end, I wasn't really that inspired to do much else with him, and he sat on a shelf for a good long while. Then the Hellbrute Dataslate came out.... and work began anew.

Man, oh man!  Deep-striking Hellbrutes into the heart of the enemy? That thought just put a big ol' smile on my face. I knew I needed a Hellbrute Mayhem Pack in my army: that meant I needed to get this guy Nurgle'd up + done, and he'd also need 2 friends.

So I bought the new Hellbrute box. Not a bad kit, ('certainly it looked better from behind than the DV version) but not very inspiring. I got distracted by something else, lost interest and so Ol' Smokey here and the Mayhem Pack project were shelved.

Recently, however, I've been bitten by the hobby bug again, and I cleared my workbench of all other diversions to focus on getting the 'Pack completed. I really love daemon engines, but this kit just didn't seem Nurgley enough for me, and it really didn't scream "tortured soul trapped inside a daemon engine against their will" either: something had to be done. I tried playing with adding a plague bearer face over the horned "mouth" opening on the model, and I liked the personality it instantly gave the kit, but the scale was all wrong. Then it hit me; Plague Toads! I got out the green stuff I started globbing it on, and I have to say, for the first time in a long time, I am really, really excited about this hobby again!

I'm committing to getting at least 2 of the 3 'Brutes done by the end of August. I'll post more pictures as this progresses. 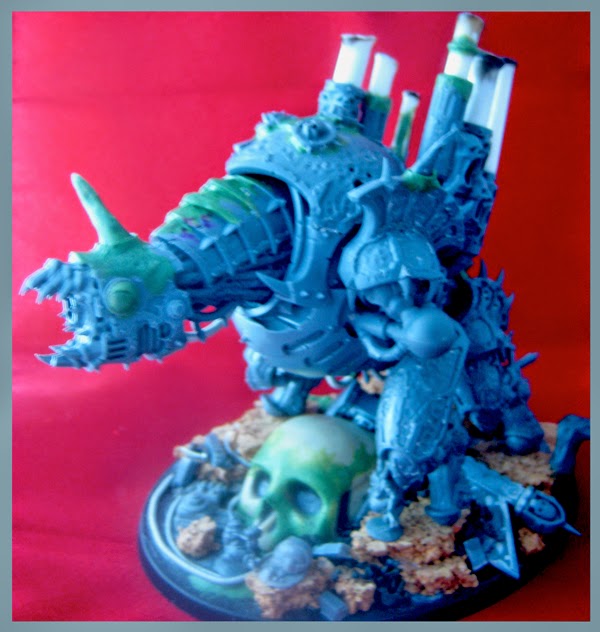 Here is a WIP shot of my Nurgle Forgefiend.

Most of the converting and green stuff is done, I just have to magnetize the weapon options and attach the hooves. The base needs a little more work/ rubble too, but nearly there!

As usual; I apologize for the poor quality of the photo (camera/photographer is crap). 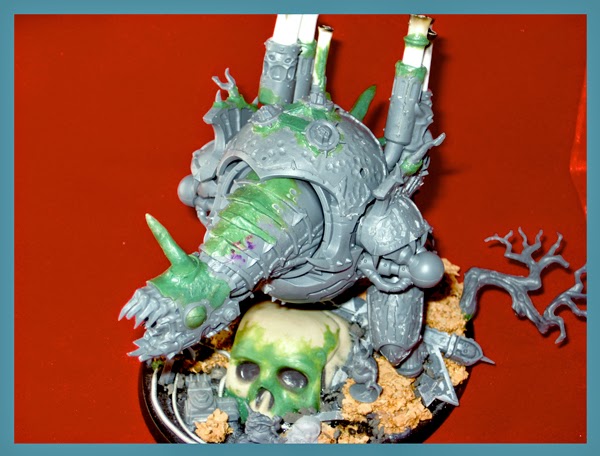 This guy has been clogging up my hobby bench for a while, so the thread on the SMCA boards was perfect motivation to push this project to the finish line.
Posted by Mr.Esty at 9:40 AM 2 comments:

cough cough
dusty in here, been a long while since I posted anything!

The good news is: I haven't been totally idle!
I've mooooostly been chipping away at my Raptor Squad and Forgefiend...

Also, as much as I hate the look of the back of the Dark Vengance Hellbrute, I got one cheap from ebay to convert-up + be more nurgley + in-line w/ the new kit (just for fun, probably won't deploy him on the table).

BUT I've also been dipping my toes into the realm of Terrain (gasp!)
I've got a bunch of great looking Armourcast stuff, and some Battlefield-in-a-Box pieces too to help round out the GW terrain and the few random things I've scratchbuilt.

Of course, this is all hearsay without pictures. I have some nice lights and a little light box thing... but a crap camera. I'm taking this WIP picture with the old camera, but the new set-up should be in place soon. When that happens, the photos will flow like water, I tell you!
Posted by Mr.Esty at 1:40 PM No comments: